For my ‘current events’ in privacy & information I have decided to give some examples of new-media artworks / experiments that refer to the subject. This is a choice of some project which will each give its own perspective and hopefully be informative as a ‘what’s being done in the field’ kind of overview. This is of-course a very limited overview, but hopefully you’ll find it useful and inspiring.

Carnivore PE is a Private Edition software based on the FBI’s Carnivore (the nick-name of the DS1000 used by the FBI for data-sniffing). It was built by the RSG (Radical Software Group) to give artists an opportunity to explore data-sniffing as an artform and be engaged in issues of surveillance and privacy. The artists create artworks – Carnivore clients using the classes on the site for either Processing, Java, Flash, Max, Director, PHP, Perl and Visual Basic. Various artists have contributed to the project, one of them Jonah Bruker-Cohen’s (ITP alum) Police State, is an installation that present the closed circuit that is built into every data-surveillance mechanism. It consists of 20 police car toys that are all remote-controlled by a radio signal that is based on Carnivore’s sniffing for ‘dangerous words’ (the same ones sniffed by the FBI). When prompted, the system uses the relevant California police code transformed to ascii and sent as a radio signal to the cars. The information being sniffed by the authorities in order to tighten their control is actually the same one which is controlling them.

Dr. Optimator’s parodical commentary on surveillane has illustrated the term ‘Homeland Security’ through 60X 1.CAM Ultimate Interactive WebCam Surveillance System! – a set of networked objects that are waiting for terrorists or enemies of the state in order to educate them in the righteous American ways. The space is viewed online through 3 surveillance webcams that are presenting it’s interior in real time. A switch panel on the site allows for the user to turn the networked objects on and off when they see an unwanted (?) guest entering the house.

An other artistic approach is the denouncement of privacy as a performative act, a form of digital exhibitionism. Such is 0100101110101101.org’s Life Sharing a project in which for 3 years they have opened their private computers to be browsed through the web by everybody, all their personal information including private documents and e-mails were public. They concluded their artist statement by the words “Privacy is stupid.”

Under the same approach we can view Alberto Frigo obsessive project. Since the 24th of September 2003 he has photographed every object he has used. He cataloged the actions by date and by type on his site. The project is ongoing…

Trevor Paglen is an artist/media activist that has devoted himself to investigative sousveillance. Through his project ‘The Hidden Bases’ he uncovers a ‘Black World’ of hidden army facilities. He documents ‘black bases’, their locations and their codes, ‘black workers, companies and corporations’ an industry that under lifelong secrecy worths an estimated 30 billion dollars, and unmarked ‘black planes’ that conducting flights that delivers prisoners to secret CIA torture bases. 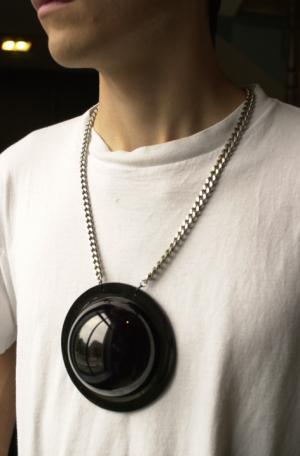 Existec is a project of wearable surveillance cameras, the kind used in casinos and department stores.

Through the We Love New York exhibition the public was invited to join artists and activists in mapping surveillance cameras in new-york.

Another less dramatic yet still in the spirit of sousveillance is the (still developing) ITP project We Watch Back, A distributed way for web users to share information about the privacy policies and coercive tactics of sites on the web.